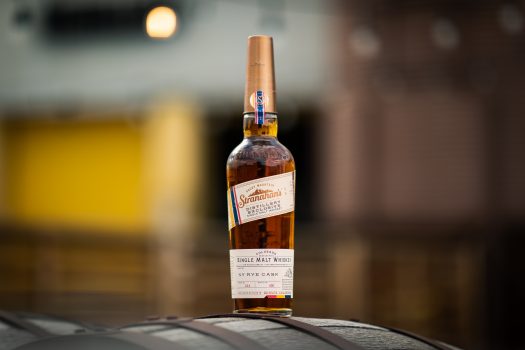 Colorado-based Stranahan’s Distillery continues its limited edition series of finished single malt whiskeys with the release of Stranahan’s NY Rye Cask, which starts with a blend of five- to nine-year-old whiskeys distilled at Stranahan’s and finished for an additional two years in rye casks from Black Distillery in Warwick, New York. (Along with rye, Black Dirt Distillery distills and produces bourbon and applejack. Though it’s not likely that Black Dirt uses grains grown in the area, the “black dirt” region is infamous for its extremely dark and fertile soil, owing to region being a flood plain.) As part of the Distillery Exclusive series, similar to the earlier Extra Anejo Tequila Cask release, it is only available at its distillery in Denver.

Single malt whiskey and rye are nearly opposites on the spectrum of whiskeys – creamy and slightly funky characteristics pitted against cinnamon-forward heat. Let’s see how they meet in the middle.

The nose successfully blends a heady, malty, and a bit weedy base with bright Christmas fruitcake notes of candied ginger, cinnamon, nutmeg, and cherry. The nose is fun, even if it still feels a little inconclusive. The palate glides with Stranahan’s signature maltiness underneath mint and ground cinnamon, with a driving bitterness leaning towards equal parts leather and grapefruit rind. In fact, I am tempted to add something akin to arugula to the tasting notes.

The finish rides heavy on bitter leather but that’s occasionally alleviated at just the right time with subtle cornflake cereal notes before it scalds your senses.

So what do you get when you cross highlands whiskey with a kiss of lowlands rye? A single malt with attitude, and certainly no sugar coating — literally, despite the teasing of such on the nose. All the grit and spicy bite of rye is featured with none of the sweetness. This one has some unexpected surprises whether your preferences lean toward either single malt or rye, but I have to admit, it got my attention and now I feel a personal gauntlet has been thrown down. The pour comes in at 90 proof and does seem to hint at being potentially too thin, but I am also thinking a higher proof may just tip this precarious scale to too much bite over its bark. As is, it sits just right as a long-haul sipping whiskey.